Close
Ask a Question
Home/ Featured Blogs/Overview of US Visas

There are also visas that are considered “dual-intent”—where the person has might have two conflicting intents in mind, i.e., nonimmigrant intent and immigrant intent (those who want to pursue a permanent resident status in the U.S.). Dual intent visas are also plentiful and include L visas (intracompany transferees executive or manager/specialized knowledge employee); O visas (extraordinary ability); K visa (fiancée of U.S. citizens). Employment authorization requirements also vary within these visas.

A temporary Visa is within the name; it’s just a temporary Visa. There’s usually a timeframe or more of a goal frame for the Visa. Once you accomplish that goal with that Visa, you would have to depart the United States, and all its benefits are given to you in the Visa, including work authorization.

There’s no such thing as a “permanent” visa; they all have a definite time or goal in mind. And although certain visas can be renewed several times, there’s always an end to the visa’s purpose. For some individuals, renewing is not cost-effective if you are renewing for several years (think of attorney fees and immigration fees); and this is when a more permanent status, i.e., permanent resident status, might be a logical step.

It all depends on how you’re trying to get into the United States. The most basic requirement is that you have to be a person of good moral character, and you must not have any criminal crimes in your background. Your education, skills, and goals will also influence your visa requirements. An immigration attorney may assist you in deciding which visa is best suited for your purpose in coming to the United States.

How Can An Immigration Attorney Help?

There are many options for an individual, and sometimes an individual will have multiple visa options to pursue. But, again, an immigration attorney can help analyze the situation and know what is best for the individual’s intent.

Does the individual want to bring his/her family while he/she is working here or studying here? Is he/she going to pursue a career in the United States? Does the person want to eventually live permanently in the U.S.? Depending on the person’s intent or wants, an attorney can guide them towards the right Visa.

However, an attorney can help and guide the individual to get to the USA as quickly as possible and more efficiently. And while an individual is in the United States, he/she might also need to change their Visa depending on the type of job they have. That’s when an immigration attorney plays a vital role and saves the individual from troubles related to his/her work visa.

Immigration laws are a very complicated subject; you want to have an attorney on your side to guide you to your goal. 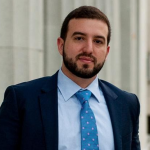 Immigration Law
A founding-partner at Prada Urizar PLLC, Mario has substantial experience working on complex immigration cases. Using creative strategies, and research writing, Mario has successfully resolved cases for clientele of various backgrounds. He practices before agencies, immigration courts, and federal courts throughout the country.
Born to immigrant parents from Nicaragua and Guatemala, Mario has experienced the sacrifices individuals endure to relocate their families to another country for better opportunities. This understanding fosters a unique bond to his clients, which motivates Mario to achieve victories for his clients.
Mario graduated from Florida International University with a degree in International Business and received his J.D. from the Washington and Lee School of Law. He is a member of the Florida Bar and the American Immigration Lawyers Association, where he has held positions in various committees in the South Florida Chapter.
Previous article Chapters of Bankruptcy
Next article Overview of Medical Malpractice